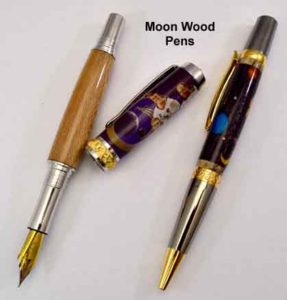 Just a quick update from the Washington DC Pen Show.  This was my sixteenth (16th) year that I have displayed my pens at this show and it was the best show in all those years!  My first show was with Rich Kleinheinz in 2004, where we split a booth because we did not know if our “hand made” pens would sell at a Fountain Pen show.  We were pleasantly surprised and I have been attending ever since.  I believe that the key for successful sales over the years is absolutely having new items for sale each year. I have “regular” customers that come each year to see what new pens I have and each year I pick up another new customer that asks me if this was my first year to display at the show!  They looked shocked when I tell them it was my 16th year there.

My new pen for this year was my “Moon Tree” pen which I sold several of them.  The pen is made from Sycamore seeds that flew to the moon and back on Apollo 14.  I told you about this pen in my last blog.  Fountain Pens were of course the most popular but the inlay kits from Kallenshaan still remain a very strong seller!  Every year at this show I see more and more younger people asking for fountain pens which is a very exciting trend.  Of course you still get the odd person who asks who uses a pen anymore?  But then again why are they there at a fountain pen show?  Still it was a great show and I hope it carries over to my next high end craft show in September in Tarrytown, NY.  Talk to you later – Happy Turning -Barry

This site uses Akismet to reduce spam. Learn how your comment data is processed.

Sign up to be notified of new blog posts.